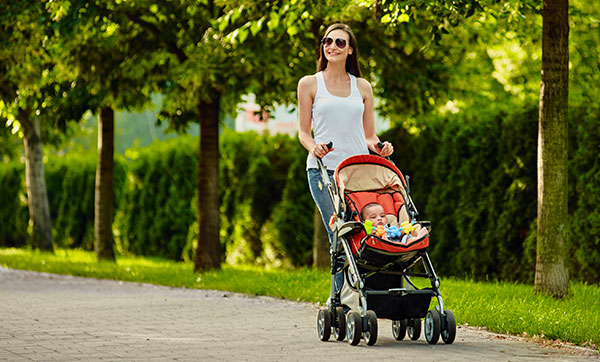 Why Is it called an Umbrella Stroller?

Umbrella strollers are lightweight, portable strollers that – you guessed it – look a bit like umbrellas when folded up. They have curved handles on top, and often their fabric is water and stain-resistant. Really, this is where the name comes from.

The umbrella stroller has a fabric seat and two curved handles, making it possible to fold down and collapse in on itself to a short, slim profile. Without the curved handles on each side of the buggy that give them that signature umbrella look, the stroller couldn’t fold in on itself vertically in addition to folding down over itself. For contrast, think about a large travel system stroller. These strollers have one long handle or bar across the top and may include a cupholder, key keeper, and smartphone hook-up. Nice to have, in general. Sturdy, maybe even able to handle the grass at the playground. But since the handle is all one solid piece, and the seats are often firm, these larger strollers can only collapse down, not across. They will always be the width of their handles. Rather than resembling umbrellas, larger travel systems strollers resemble a folding lawn chair.

In the beginning, our wiggly bundles of joy come with a TON of gear–all of it heavy. Whether you use a wrap, a carrier, or a travel system for your newborn, moving around with a baby gets frustrating almost as soon as you think of the errand you need to run. Just the thought of wrestling the stroller into your car can drain your energy. Once the errand is run and it’s time to fold that mobile nursery up, frustration can morph into lot rage! It isn’t pretty.

One grandfather witnessing such a struggle inspired the invention of the umbrella stroller.

Owen Finley Maclaren, a former test pilot, and aviation engineer watched his beloved daughter and son-in-law wrestle with their daughter’s bulky pram in 1965. They had traveled some distance to visit him, bringing his granddaughter. Watching them maneuver the bulky pram prompted him to invent something better. He drew inspiration from his aviation days, modeling what he later named the “Baby Buggy” after the collapsible landing gear he had designed for the Spitfire aircraft of WWII. He chose aluminum tubing for the frame, knowing that portability implies lightweight. Maclaren’s Baby Buggy included a one-handed folding device to free up frazzled parents’ hands. The buggy’s ability to fold lengthwise and widthwise makes it an extremely attractive option for crowded events or long-distance travel even today. Maclaren’s company still manufactures baby gear, including a wide range of modern “Baby Buggies.”